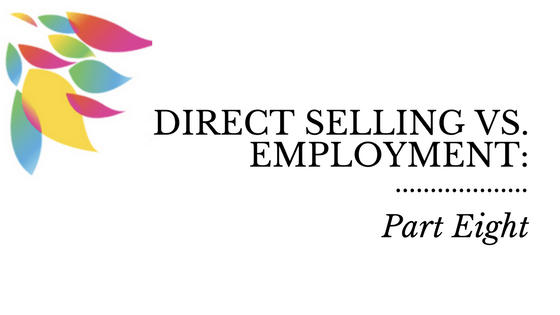 What if you as the sales manager actually came up with an idea and it allowed the company to explode with growth? Let’s say that your paycheck represents some fraction or percentage of the overall company profit. You come up with an idea to do something and that company doubles or triples in size because of your idea. What’s going to happen to your income?

In most instances, well a couple of things could happen. It would change the commission structure so that you’re not earning too much money even though you are the direct cause of the growth of the organization. You could also simply be out of a job. I’ve seen both happen.

Before starting my journey as an entrepreneur I worked for an oil company. I was certainly responsible for a lot of growth. The company was commission based and my check was growing. But new management came in and pulled the entire commission component from the package. Though it was really the best thing that could have happened because I saw first hand what happens when you are productive in that sort of structure. You’re certainly not rewarded long term. In a lot of instances, it’s punishment. And I’ve heard many stories over the years. I’m not unique to that kind of scenario.

That happened to me, too. I had a job fixing car stereos and I was earning per stereo. I was working so insanely hard for so many hours. Normally, my boss’s job would pay about five times more than mine, but I actually got to make about two-thirds to almost three quarters to what he was making. He freaked out. He put me on display building detail for months until my income average just went to crap.

I went weeks without making a few hundred dollars. I had a kid and was trying to put money on the table. The purpose of this business is to give individuals the opportunity to build their business to the degree that their talents will allow them and provide them a financial opportunity that grows. So for me, as a very entrepreneurial person, I love a business model that’s there to support the person. If the person at the table doubles their sales volume only to wake up the next month and realize their targets have been raised just to make the same amount of money that they were making last year, it’s not worth it.

To continue this podcast from Prosperity of Life, please visit this link here.