5 Of the World’s Most Popular Buildings to Visit 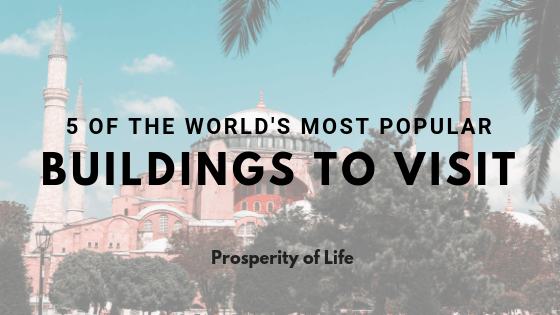 While the world is full of amazing and famous architecture, there are a few structures that are renowned all over the world for their impact on architectural history. Below you’ll find information about ten of those infamous structures worth visiting.

The Empire State Building in New York City was built in the art deco style and designed by Shreve, Lamb & Harmon and was completed in 1931. The skyscraper is still one of the tallest in the world, standing at 1,454′ to its tip. One of the iconic tourist attractions of New York City, the Empire State Building is open to the public and you can plan your trip on the website.

Hagia Sophia resides in Istanbul, Turkey and was originally established in 537 AD by the Greek Orthodox church and was repurposed by the Ottoman Empire as a massive mosque. You can see the expansive dome and four looming minneretts from miles away, transforming the landscape of the city. The church remains one of the most visited monumental structures in the world and is full of art – the Hagia Sophia Museum website has a more complete history.

La Sagrada Familia, in Barcelona, Spain, is one of the world’s more unique architectural structures. Designed by famous architect Antoni Gaudi, this massive church has been under construction since 1882. After the architect died in a street accident, his detailed plans were carried out by his team. As of today, the building is said to be under its final stages of construction and predicted to be finished in the 2020’s. While it is still a work in progress, the stained glass and massive ceilings are a sight to behold, and you are able to visit now.

Construction of the Taj Mahal, located in Agra, began in 1631. This large marble structure is actually a mausoleum to the Mughal emperor Shah Jahan. This iconic building is a tourist destination, and a great place to put on your bucket list of buildings to see. The ornate details and beautiful gardens are something to behold.

Perhaps one of the more romantic architectural feats, the Eiffel Tower in Paris, France, is one of the most famous structures in the world, and has become an icon of Paris. Gustave Eiffel was the chief architect and mastermind behind this structure and construction began in 1889 in congruence with the Exposition Universelle. Today, you can ride to the top of the tower, eat in some of the restaurants within, or get a beautiful view of Paris.