10 Best Places to Eat in Europe 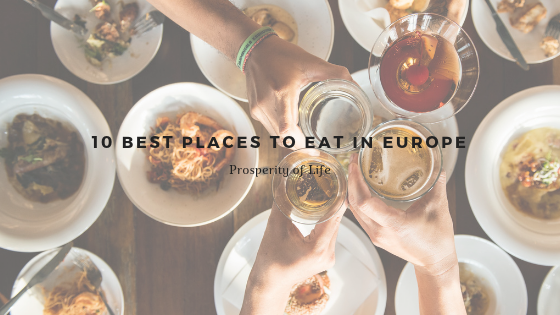 Food is one of the most exciting parts of traveling somewhere new. The chance to try different culture’s cuisines and local flavors is an adventure all on its own. Eating is easy, but trying to find somewhere to eat can be difficult-especially if you’re on a different continent.

Europe is well-known for its food thanks to all the various cuisines it hosts. If you have a trip coming up and want to sample the best the continent has to offer, you can’t go wrong by stopping at one of these 10 highly recommended restaurants.

One of the best places in the world to eat, Noma is highly exclusive with only 12 tables. Run by Chef Rene Redzepi, the restaurant specializes in 20-course meals made entirely of Scandinavian ingredients. The restaurant is cozy and covered in windows designed for guests to be able to witness the various seasons of the region.

This Michelin three-starred restaurant boasts a luxurious and cozy interior that will make you believe you’re eating in the home of a French nobleman during the Renaissance. Chef Bernard Pacaud starting cooking at age 15 and opened up L’Ambroisie about ten years later. Two years after opening the restaurant it earned two Michelin stars.

Established in 1961 by Armando Gaglioni and his sons, Armando al Pantheon excels at all your beloved Italian dishes. The restaurant is a favorite among travel and food bloggers for its homey atmosphere and comforting dishes.

If you find yourself in Lyon, the food capital of the world, you must find time to visit this restaurant. The restaurant was run by French cuisine legend, Paul Bocuse, until his death in January 2018. He was running the restaurant well past his 90th birthday, which goes to show how seriously Bocuse d’Or takes their cuisine and how much heart goes into it.

With a seasonal menu and world class chef, Lastage is sure to please. Timely ingredients demonstrate the bounty of food and flavors the city has to offer. The restaurant’s mission is to pay homage to the simplicity and traditional flavors of the area. The best example of their humility is the fact that keep their Michelin star in their basement.

Modena is the home of the Ferrari, so you know it’s a luxurious place. If you want the lavish feeling to continue, book a dinner at Osteria Francescana, a 3 Michelin star restaurant. Heading up the restaurant is world-renowned chef, Massimo Bottura, who was born in Modena and continues to showcase the best flavors the city has to offer.

This elegant hotel is home to a few restaurants, but the one to take note of is Lorenz Adlon Esszimmer. The eatery boasts 2 Michelin stars, thanks to Chef Hendrik Otto, who runs the restaurant alongside a world-famous Maître Oliver Kraft. With beautiful views and exquisite wine pairing, a meal at Lorenz Adlon Esszimmer is unlikely to be forgotten.

Also called the Loggia del Mercato Nuovo, de Porcellino is a beloved marketplace in the middle of Florence. The market hosts a variety of local flavors and vendors selling well-priced and extra delicious food. Many travel bloggers and foodies suggest trying the local street food, the best of which is a sandwich made of lampredotto, one of the four parts of a cow’s stomach. If that doesn’t sound appealing to you, check out bistecca alla fiorentina, a large steak that is the symbol of the town.

Run by Claude Bosi, this restaurant’s name is in homage to The Michelin Man, whose name was Bibendum. Housed in the original U.K. Michelin headquarters, the cuisine honors food that is fancy but not ostentatious, skilled but not stuffy. It offers incredible flavors, textures, wines, and experiences that are far worth the price a meal there costs.

San Sebastian is lovingly known as the foodie capital of the world, and for good reason. The city boasts “one of the highest numbers of Michelin stars per meter.” You could put your hand anywhere on a map of the city and find an incredible meal. If you need more direction though, look no further than Mugaritz. The restaurant is the 6th best in the world. The kitchen is home to Andoni Luis Anduriz, one of the best chefs in the world. What does all this mean? A meal at Mugaritz is, quite literally, world class.

All of the cities listed above are known for their food offerings. Like in San Sebastian, if you visit any one of the places mentioned, you’re likely to find a good meal around every corner. If you need more guidance or want more relaxed offerings than the ones listed here, speak to locals. City dwellers will know the best and most authentic restaurants to eat at, and usually with a smaller price tag.